Seriously, I feel like days just fly by, and I’m not even back to work yet. Trying desperately to get something done to account for my time, so I don’t feel like a complete non-contributor. I will have at least one new layout or card to post by the end of today (even if I have to finish it at 2 minutes to midnight.)

Hubby was not as impressed by “West Side Story” as I was, by a long shot. I’ll give him credit, he said he was glad he had seen it once, that it made me happy and that he hadn’t realized that he had already heard so many songs from the musical before. Also admitted that if he knew it/heard it better, it might have been better, but noted that there were points when I and the rest of the audience laughed but he missed the humor simply b/c he could hear what they were singing, or the like. And gang members breaking into a dance as they walked down the street was a stretch for him. But he went with me and smiled as he saw tears running down my face at the end, so I gotta give him props. And my favorite scene remains Rita Moreno and the girls kicking it up in “America.” That was such a fun dress she got to wear! 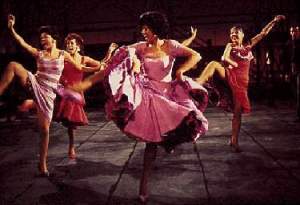